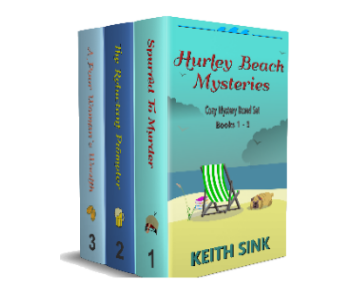 The Hurley Beach Mystery Series is a heartwarming clean cozy series about a family of detectives in a small North Carolina beach town. The matriarch of the family, Velma, runs a successful beauty salon, is active in her church, and occasionally asks too many questions. She’s accompanied by her overfed pug, Henry. Her son Bernie is a retired police detective who now runs his father’s bait and tackle store. As much as he tries to stay out of his past, he keeps being pulled back in. Sandy, Velma’s niece, is a newly appointed Sheriff’s Deputy who is trying to make her mark in the department while fighting some very old-fashioned norms.

In book one, we follow the discovery of a local girl, Abigail Childress, a much-liked member of the community who is found dead at the surf’s edge. What first appears to be a suicide, soon leads the investigators to a different conclusion. Murder.

Could the killer be a relative of the victim, a resident of the sunny vacation destination, or an out of towner?

In book two of The Hurley Beach Mystery Series, an energy drink promoter is implicated in a murder when a body is found in his burnt-out car. The stranger refuses to cooperate as gang tag signs appear around town. Is the promoter in on the escalating attacks or is he a naive pawn?

Is the town itself at war and who can the amateur detectives trust?

In book three, we follow Velma and Sandy as they discover the body of a missing man buried in a shallow grave. Why was he killed and why is everyone in his life so calm about it?

Could the killer be a relative of the victim, the current wife, the ex-wife, or business acquaintances? Was he killed because of what he knew?

I hope you enjoyed the visit to my site. Your privacy is important to me. Please read our privacy policy if you would like to know how we use data on this site. Thanks

Any cookies that may not be particularly necessary for the website to function and is used specifically to collect user personal data via analytics, ads, other embedded contents are termed as non-necessary cookies. It is mandatory to procure user consent prior to running these cookies on your website.